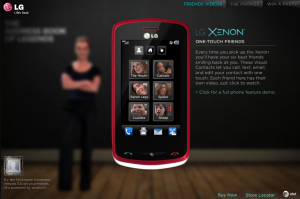 What do you get when you cross Def Leppard with the Sex Pistols?

That’s probably not the question LG pondered when creating their new touch screen messaging phone, the Xenon. However, when they came looking for a catchy pop/punk song to serve as the soundtrack to their viral marketing campaign, we thought Man Raze’s “Turn It Up” sounded just right.

It’s always fun to uncover an obscure gem of a song for a project.  And it’s even better to bring legendary rock musicians into a forward-thinking online campaign, especially considering you can’t even buy Def Leppard songs on iTunes yet.  Check out the new LG Xenon and hear Man Raze “Turn It Up” here: