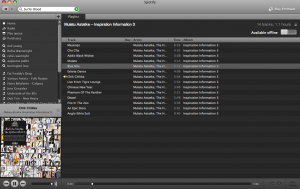 In late 2009, I was invited by a well-connected music friend to join the beta group for Spotify’s Premium service. For those of you who aren’t aware of Spotify Premium, it’s an-advertising-free streaming audio application from Swedish wunderkind Spotify. Spotify offers a free version with advertising and a Premium version without advertising, which is expected to cost $15 per month when it launches in the US in Late Summer 2009, oh wait, Fall 2009, scratch that, Spring 2010…well, maybe Summer 2010, if you’re lucky.

Though Spotify has conquered much of Europe, it is still not publicly available in the US, since one label group, schoolyard bully and notoriously late-to-the-party Universal Music has not signed a licensing agreement with Spotify, though the other majors have.

However, due to my good fortune (and my friend Marc), I have been enjoying the Great Jukebox In the Sky. Don’t get me wrong: I love CDs and still love vinyl. I love to hold an album, read the liners cover to cover, and still listen primarily to full albums. I think I always will. Not only do I love CDs, but I have spent many years building a successful business with CDs as one of our primary products.

So it’s a bit sacrilegious for me to say this, but here it is anyway: Spotify is the killer app for the way I consume and enjoy music.

On my laptop, I leave Spotify’s terminal window open at all times and can search for any artist, any album and any song. Within seconds, an artist’s entire catalog appears and I can play high quality streams (320kbit/s) to my heart’s content. Albums or songs I like can be dragged to new playlists, giving me a shortcuts to any album at any time.

Now, here’s the kicker: I read about and bought a 3rd party application called Airfoil ($25 – www.rogueamoeba.com), which “highjacks” your audio source (Spotify in this case) and slings it to an Apple Airport Express ($99), which is plugged into an outlet and to the Aux input on my stereo preamp. I have a multi-stage amp/preamp already wired to speakers in different rooms, so now at home I have the largest music collection in the world all at my fingertips and playable in different rooms of my house.

There are other streaming services available, such as Mog.com, which also offers a free ad-supported version and a premium no-ad pay version for only $5 per month, Rhapsody and Lala.com, but for me, Spotify is just the ticket, thanks to high quality sound, an intuitive UI, no delays or audio skipping and an immense library of available music. For those of you not lucky enough to have dual citizenship with Sweden or a connected friend to get you in on the US beta, definitely check out Mog.com.

…Now if Spotify will just launch its US iPhone app, I’ll truly have the world of recorded music at my fingertips at all times.